The Sims Wiki
Register
Don't have an account?
Sign In
Advertisement
in: Aliens, Game mechanics, Livin' Large,
and 7 more
English 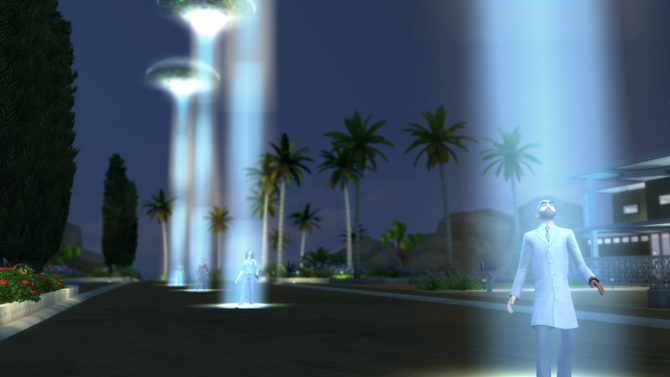 Alien abduction is an event that can happen in The Sims: Livin' Large, The Sims Bustin' Out, The Sims 2, The Sims 2 (console), The Sims 3: Seasons, and The Sims 4: Get to Work. During this event, an alien will temporarily abduct a Sim via an unidentified flying object (UFO.) It can happen to a Sim who is using a telescope to stargaze at night. Every one of the abducted Sim's motives go haywire while they are on board the craft, and they return a few hours later.

In The Sims, alien abduction is only possible when a Sim uses the "Gaze" option at night on the Horrorwitz "Star-Track" Backyard Telescope introduced in Livin' Large. If a Sim uses the telescope at night, there is a low chance that the Sim will be abducted by an unseen UFO. A blue sphere will appear, and the Sim will float into the air screaming, before vanishing.

When a Sim is successfully abducted, all family members and NPCs on the lot will run over to the area of abduction and cry. While the Sim is abducted, their needs will stay static and their personality is changed, as well as their interests. After a few Sim hours, the abductee will return and will immediately think of aliens and spaceships in their thought balloon.

In The Sims Bustin' Out, an abductee will return after about 8 hours with a changed personality. This might, or might not, work in the player's favor. It could be a way of changing stats that the player regretted having given the Sim, or it might drastically alter certain categories that the player sees as favorable; e.g. from very neat and not outgoing to messy and extremely outgoing.

In The Sims 2, Sims will only be abducted if they are using the Farstar e3 telescope. If the Special Event Camera is enabled, this will trigger a cutscene. Otherwise, a bluish beam will appear, and the Sim will be pulled upward into the unseen UFO, while attempting to hold on to the telescope.

After 3 Sim hours, the abducted Sim will be returned. Until then, an icon of the UFO labeled "Return Home" will appear in the Sim's action queue, and his or her motives will fluctuate wildly. If the Special Event Camera is enabled, the Sim's return will trigger a cutscene. Otherwise, the UFO will appear, hover above the street, and unceremoniously drop the Sim onto the street. This does not harm the Sim, although he or she will bounce. Other Sims and pets on the lot will come to watch, at least if they are awake. The front of the UFO opens when the Sim is ejected. This can be seen in the cutscene, or if the game is paused at the right moment and the display is rotated so that the front of the UFO is visible. If the abducted Sim is an adult male, he will always come back pregnant, so long as he is more than 5 days from becoming an elder, and there are fewer than 8 household members when he is abducted.[1] In three days, he will give birth to a half-alien baby whose other parent is the unseen NPC Pollination Technician.

In FreeTime, all telescope actions carry a chance of alien abduction, but the top aspiration benefit for the Knowledge aspiration, Summon Aliens, allows a Sim to create a spotlight with a flashlight and telescope, which greatly increases the chance of abduction. This benefit can be used with the Astrowonder telescope as well as with the Farstar e3. If the Special Event Camera is enabled, the cutscene will play no matter which telescope is used. However, if the Special Event Camera is disabled, a Sim abducted while using this benefit with the Astrowonder will simply vanish, as the Astrowonder has no abduction-specific animations.

If University is installed, a teen who has been abducted can apply for the Extraterrestrial Reparation Grant, which is a §1500 scholarship.

Aliens are very important to the Strangetown story (especially with The Curious Brothers), but play a lesser part in Pleasantview - except in the case of Bella Goth and the Caliente Family.

A player who wants a Sim to be abducted can use the console command "boolprop testingcheatsenabled true", then shift-click any telescope, and select be abducted. This cheat does not work after Seasons, or Bon Voyage is installed. It also will not result in the Sim having the memory of alien abduction, but will still result in pregnancy for male adult Sims 6 or more days away from the elder stage.

The UFO in the game is based on the one from SimCity 3000.

By default, alien abduction is disabled in The Sims Castaway Stories, but it can be enabled with mods,[2] and male pregnancy works in the game.

Console versions of The Sims 2[]

In The Sims 2 for consoles, alien abduction works as in Bustin' Out, except that abducted Sims will vomit and will yell at other Sims for no apparent reason. The Sim will not become pregnant or have a baby. One of the most popular methods of getting a Sim abducted is to make sure the Sim has high Logic and is in a good mood. Have the Sim gaze into the telescope for several hours, and at some time, he or she will be whisked away by a beam of light from the sky.

In The Sims 2: Castaway, there is an island named Crystal Island. On it, are giant green crystals and odd rock formations, and it is the only place in the game where a Sim may be abducted. For a Sim to be abducted, they must have the airplane radio and transmitter, two items used to call for rescue, and the radio must be placed on the island. The Sim must then place the transmitter and send an SOS. Upon doing so, an unseen UFO will suck the Sim into it and, to the player's delight, raise all motives to full. The Sim will then fall down, recollect itself, and yell at the sky, then run to a nearby sand gathering pit and vomit. The Sim will sometimes return with cans of Alien Food, but will not be impregnated or have any other effects.

In The Sims 2 Pets, Sims can be abducted if they use the telescope and stargaze. In an hour or so, the player will hear a strange noise, and see that the Sim is struggling to hold onto the telescope. The Sim will lose his/her grip and be sucked into an unseen UFO. A few hours later, the Sim will return with an information bubble which says that (NAME) has come back from his/her trip into the cosmos. Some players have reported that abducted Sims may bring items back with them.

In the Nintendo DS version, you will be abducted if you walk out into the desert and wait for your sanity meter to hit zero. After the abduction, your Sim will appear in the manager's hotel room, lying on the floor. They will wake up after a few seconds. The Sim will find it very difficult to walk for the next few minutes. You can combat this by sleeping.

Aliens and alien abduction return in The Sims 3: Seasons. Abduction can occur when a Sim is on the same lot as a UFO, between the hours of 12 am and 3 am. A Sim who has been abducted will have a negative "Abducted" moodlet for 10 hours. There is a 2% chance a Sim will get abducted at night. An additional +13% chance will be added if the Sim stargazes through a telescope, and an extra +38% chance will be added for each space rock in a Sim's inventory, up to +75%.

When an abduction occurs, multi-colored sparkles will appear in the sky. All actions in the soon-to-be-abducted Sim's queue will be canceled, and will be replaced with the "Investigate Mysterious Anomaly" action. During this action, the Sim will walk over to the sparkles and look up at them curiously. Even if the player does not wish the Sim to be abducted, this action cannot be canceled, unless the player manages to block the Sim's way to those sparkles. Soon after, a UFO will appear, a blue beam will suck the Sim up into the UFO, and the UFO will then take off. Unlike The Sims 2, the Sim's motive bars are not affected during abduction. Upon return, along with the aforementioned "Abducted" moodlet, the Sim will have a negative thought bubble of the abducting alien, and may also cry, get angry or feel nauseous.

Female Sims only receive the "Abducted" moodlet after an abduction. There is a 33% chance that a young adult, adult, or elder male Sim will get the "Unexpected Weight Gain" moodlet after the "Abducted" moodlet has expired. After the "Unexpected Weight Gain" moodlet has expired, the Sim will give birth. Unlike The Sims 2, the baby will be purely alien, not a hybrid. Also unlike The Sims 2, the Sim is treated as a host, not as being truly pregnant. This is probably why elder males can carry alien babies, even though elders cannot become pregnant. Since male Sims carrying alien babies are not considered to be truly pregnant, they do not receive maternity leave or change into maternity clothes.

Another difference from The Sims 2 is that the player will be given the choice of sending the baby back to the alien home-world.

Alien abduction returns in The Sims 4: Get to Work. An abduction can occur anytime at night (10 pm- 4 am). When an abduction does occur, the Sim will stop whatever they're doing and go to "Investigate Weird Light". The Sim will then be beamed up by a blue light into a UFO and be flown off. The Sim will be returned a couple of hours later with a moodlet pertaining to aliens and abduction.

The interaction "Investigate Weird Light", which replaces all items in a Sim's queue at the beginning of the event, cannot be canceled.[3] However, it can be stopped by blocking the Sim's way to the weird light, such as locking the doors for the Sim.

Both female and male Sims, including aliens, can be abducted. Only males will return with a 25% chance of alien pregnancy, while females will only receive the moodlet.