Alice Martin is a pre-made Sim who resides in StrangerVille, the world introduced in The Sims 4: StrangerVille. She lives together with her roommates Mark Eggleston and Leslie Holland. Despite the household description stating that the three are friends, they are only acquaintances.

Alice is a young adult, around 23-20 days away from becoming an adult. She is unemployed and has the Painter Extraordinaire aspiration. She has three skill points in guitar and six points in both the piano and violin.

According to her household biography, Alice had gained a large sum of money from her parents in order to explore her inner creativity in a less hectic town. She has skill points in various instrument skills, but has an aspiration to become a great painter. This may indicate that she has gotten tired of her old hobbies of playing instruments and is wanting to learn painting instead.

Alice is also considered to be the main character of the StrangerVille mystery story. She is heavily featured in various promotional materials, such as the official trailer and comic series for StrangerVille, showcased as a new town member unaware of the strange infection.[1]

In the official reveal trailer she is shown to be friends with Erwin Pries, the local conspiracy theorist, and Jess Sigworth, who has become infected. After realizing that Jess has become infected, Alice begins to investigate the situation with Erwin. After doing some heavy researching, spying and curing Jess, they all head for the mysterious secret lab in the outskirts of the town and try to take down a peculiar creature. However, despite the trailer showing Alice as friends of Erwin and Jess, they have no relationships with each other in-game.

In the four part comic series, Alice is yet again featured as a prominent main character. In the first part she is shown talking to Erwin, but doesn't believe his facts of the town being infected and somehow controlled by the government. However, later on in the second part Alice realizes that something is actually wrong and finally decides to investigate. In the third part Alice travels to George Cahill's crashed airplane home, where she gets scared by him. After having a small discussion, Alice decides—despite George's doubts—to join the military after hearing about it from Erwin and heads to the secret lab to cure the town's strange infection.

Alice briefly appears in the The Sims 4: Discover University official reveal trailer as a student at Foxbury Institute. She can be seen playing ping-pong with fellow Foxbury student Erwin Pries which indicates that they have been friends since college. 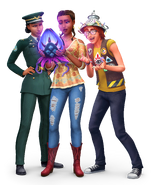 Alice in the cover art render of StrangerVille, alongside Erwin Pries and Jess Sigworth.

Alice Martin playing ping-pong in the Discover University reveal trailer.
Add an image to this gallery

Retrieved from "https://sims.fandom.com/wiki/Alice_Martin?oldid=926658"
Community content is available under CC-BY-SA unless otherwise noted.