Alexander Goth ( /ˌælɪɡˈzændər ɡɑːθ/) is a pre-made, playable Sim that shipped with The Sims 2. The youngest child of Mortimer and Bella Goth, Alexander was born after the events of The Sims and lives with his aging father and older sister, Cassandra at 165 Sim Lane in Pleasantview. Shortly before the start of The Sims 2 Bella went missing, having been abducted by aliens, and hasn't yet returned.

Alexander and his family return in The Sims 4, albeit in an alternate timeline, where they live at Ophelia Villa in Willow Creek.

Alexander first appears in The Sims 2, where he lives in Pleasantview with his father and older sister. He has pale skin and round glasses. He seems to share his father's intelligence, despite his young age, and is enrolled in private school. Due to the apparent age gap between him and his parents, it is believed that he was born just before Mortimer had aged to an elder, resulting in a large age difference between him and his sister, Cassandra Goth. However, there is a picture in the family album of Alexander being held as a baby by Cassandra when she was a teenager, and Mortimer is shown as an adult, so it's likely he was born a day or two before Mortimer aged.

He has a memory of being taught how to talk by Bella (however, Mortimer has memories of teaching him all three of his toddler skills), so she was probably abducted shortly before he became a child. He likes to play with toys, play chess, and occasionally play piano. When the family is first played, he is four days away from becoming a teenager.

If Mortimer is already dead by the time Alexander goes to college, his mother will be the parent who drops him off at his dormitory, even though she's supposed to be missing. This could hint that she is, in fact, alive somewhere, but it may just be the game mechanics.[1]

Through SimPE, it is possible to see that he has a hidden fortune aspiration token, hinting at the aspiration EA wanted for him, though the player can choose any aspiration they wish when he becomes a teenager. Alexander and his father have exactly the same personality.

His facial structure is almost identical to Goopy GilsCarbo's, the only differences being the chin and underneck. Using the 17th face template in Create a Sim, Alexander's face can be replicated by moving the chin back by three clicks, and putting the underneck up by one click.

Life leading up to The Sims 3 (Nintendo DS)[]

Alexander (referred to in-game as Alex) re-appears in The Sims 3 for Nintendo DS, this time with a very different appearance and personality. He lives in the town of Beacon Bay, and is married to Cecilia Goth. His family bio states that he and his wife have lived in the town since the beginning, and that their gloominess is a result of having a father named Mortimer, and it can be assumed that his father is already dead in the game. He wears a top hat and suit, looking very much like his grandfather in The Sims 3. Strangely, his hair is orange, meaning that he may have dyed it. He is an acquaintance of Holly Alto, and his traits are neurotic, brave, outgoing, and ambitious. Unlike his father, and like his grandfather, he chose to work in the business career instead of science, and is a CEO at the start of the game. (In The Sims 2, his bio and skills give the idea that he is destined to be a scientist like his father.) He has two skill points in painting and charisma. He and Cecilia start off in the game with §50,000.

There is a book in The Sims 3 and one in The Sims 3: Supernatural entitled Murder in Pleasantview and Baron Graff Van Gould. Both are written by an Alexander Goth, although it could not be the same Alexander, since Alexander's parents are children in The Sims 3, unless he had access to a time machine[TS3:A] or time portal.[TS3:ITF] There is a possibility that the title of the first book is a hint as to more realistic ideas about dealing with the mystery of Bella Goth's disappearance, for players who wish to connect their story as close to The Sims 2 as possible, as alien abduction wasn't present in The Sims 3 until The Sims 3: Seasons.

Alexander returns in The Sims 4, living at the Ophelia Villa in Willow Creek with his parents and older sister. It has been confirmed that this version of Alexander exists in a separate continuity to the versions present in previous games.

Alexander is a child who is 13 days away from becoming a teen. He is a grade school student with a C grade when first played. He carries a homework book in his inventory and has one point each in the creativity, mental, motor, and social skills. He is friends with his parents and older sister, but has no relationships outside of his household. He has only one trait, bookworm, and has the Whiz Kid aspiration. Alexander and his family were given an official makeover shortly after the release of patch 129 of the base game.[2]

This version of Alexander is much closer in age to his sister Cassandra than he was in The Sims 2, and his parents are still at the beginning of the adult life stage. This would seem to imply that Mortimer and Bella had Alexander much earlier in The Sims 4 continuity than in the main previous timeline, when Alexander was apparently born shortly before his parents aged up to elders.

Bella Goth sending a teenage Alexander to college. This may hint that Bella is still alive somewhere. 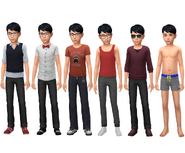 Alexander in a render of Get Together.

Alexander Goth in the process of becoming frozen.