The Sims Wiki
Register
Don't have an account?
Sign In
Advertisement
in: Sims, Male Sims, Adults,
and 19 more
English

Albany Capp (né Norman) is a pre-made Sim from Veronaville. The son of Richard and Anne Norman, he married the much-younger Goneril Capp and had four children: Miranda, Hal, Desdemona and Ariel Capp. His family can be found in the Family bin. He is a huge family Sim, wanting a big family and having four kids which they do.

Judging by Albany's personality, bio and aspiration, he probably only married Goneril to have children. Goneril's bio indicates that Albany probably married her for her money. This would be inconsistent seeing as it would be her father's money that Albany would have been after and not Goneril's.

He and his family start with §20,000 in funds at the start of the game which isn't too bad for a normal sized family, but pretty bad for a large family like Albany's. Unless anyone in the household gets a job after purchasing a house, or if cheats are used, the family will usually go broke sooner or later. Albany and his brother-in-law Cornwall Capp are good friends at the start of the game, while they are enemies in the Shakespearean play, King Lear.

Unlike Cornwall, Albany has a major role in the feud with the Montys even though he is not directly a part of it. He is enemies with Patrizio, Isabella, Bianca and Antonio Monty all in which have never even met him. However Albany has a positive but low lifetime relationship with each of them. If any one of these Montys meet Albany, they can easily persuade him to set aside his grudge, provided the player cancels out any negative autonomous interactions that Albany may initiate on them.

Albany's parents have black and brown hair, but oddly he has blond hair as well as having blond hair genetics. It is possible that Albany inherited the blond genetics from his paternal grandfather or his maternal grandmother. When the family is first played, Albany is 10 days from being an elder. While most playable Sims in The Sims 2 had their first kiss as a teenager, he had his first kiss as an adult.

Albany and Kent Capp are the only two living members of the Capp family who aren't fit. Albany is close to becoming fit, while Kent is close to becoming fat. His memories place Miranda as the family's third child. Hal and Desdemona come first and second respectively. Ariel is fourth. Goneril's memories place the children's births in the correct order.

Oddly Albany has a memory of potty training Miranda, however according to his memories she hadn't been born yet. Due to Albany's memories and his children's NIDs order, some players believe that Miranda was originally meant to be the family's third child. When editing in SimPE his zodiac sign is not recognized. This could explain why Albany doesn't have a zodiac sign mismatch in-game like most pre-made playable Sims from the base game do.

An oddity is that the game files show that Albany recognizes Puck Summerdream as his friend and vice-versa, however their daily relationship level is not high enough for that. Also when their respective households are first played, they will have no relation to one another. 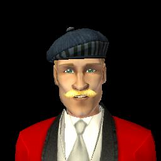