Alan Stanley is a pre-made three-star celebrity Sim who resides in the city of Bridgeport, along with his girlfriend, Emmy Starr. He was introduced in The Sims 3: Late Night.

He is close to achieving his lifetime wish of becoming a Distinguished Director. He is at level 8 in the Directing track of the Film career, which is Script Writing. His girlfriend, Emmy, who is more famous than he is, works for him as an actress.

He starts off with 2 points in Piano skill, and 5 skill points in Writing. In order to get a promotion, Alan must improve his writing skill to the required level, 8 points. He also is one of the few Sims with the hidden pyromaniac trait.

His name likely references both actor/director Woody Allen and director Stanley Kubrick, as well as bearing a likeness to Allen.

He shares his last name with Garvin Stanley from Isla Paradiso, though a family connection between the two is unknown. 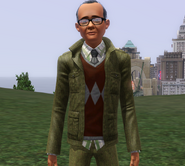 Add an image to this gallery
Retrieved from "https://sims.fandom.com/wiki/Alan_Stanley?oldid=928065"
Community content is available under CC-BY-SA unless otherwise noted.