The Sims Wiki
Register
Don't have an account?
Sign In
Advertisement
in: Sims who have mastered a skill, Sims, Female Sims,
and 57 more
English

Not to be confused with Mrs. CrumpleBottom or Agnes Seabottom.

She returns in The Sims 4: Cottage Living expansion pack where she lives in the world of Henford-on-Bagley, where she also owns a garden stall with her cousin Agatha Crumplebottom.

The young and unfortunate Agnes makes an appearance in The Sims 3. She lives in Sunset Valley in a very modern house. Her young husband, Erik Darling, is deceased. Agnes bears some resemblance to a World War II widow: her blonde hair is cut into Bettie Bangs, and her outfit, a short trench dress and Oxford shoes that sport stiletto heels, matches the Western fashion trends of the 1940s.

She is good friends with her sister, Cornelia Goth, despite the fact that she barely knows Cornelia's husband Gunther or son Mortimer. She is much younger than her sister, as they have a difference of 20 days. Cornelia is an adult nearing an elderhood, and Agnes is a young adult nearing adulthood.

Agnes's bio states that she married Erik, but didn't take his last name because he drowned on their honeymoon. His death left her bitter and lonely, though some players like to resurrect Erik with ambrosia or the "Oh My Ghost" opportunity. And since his ghost haunts their house, he scares away any possible suitors for Agnes. There is a partially-finished nursery in her house which includes a crib, a teddy bear and a giraffe picture, possibly indicating that she and Erik were planning to have a baby.

She starts off with notable skill levels of 6 in cooking, and she is close to mastering her painting skill, having 8 points in it. In her inventory, she carries the novel Special Snowflake. She will often have the wish to join the Medical career, because of her bookworm trait. When Sunset Valley is first played, Agnes is 6 days from being an adult.

It has been revealed that she is the "Miss Crumplebottom" in The Sims: Hot Date, and although many players think so, she is not the Mrs. CrumpleBottom in The Sims 2: Nightlife.[1] Her facial features are alike, such as the crooked nose, the eyes, and the lips.

By this time in her life, Agnes's emotional pain from her husband's death has caught up to her, and she had transformed into the dreaded Miss Crumplebottom. Because of her distaste for romance, she has become a very old-fashioned, stern, and strict woman who appears to abide by a moral code from the Victorian Era. For example, she detests when two Sims have any romantic interactions in public. When she sees any of these actions taking place on a community lot, she will promptly scold the Sims, smack them, or beat them with her purse.

Whenever Agnes enters a community lot, she doesn't just sit around waiting to smack someone. Agnes usually plays chess, but if someone joins her she will, sometimes, leave. Other activities includes dancing on the dance floor, ordering ice cream, nagging people, looking around the room, resting her head on a recliner, and playing the piano. If The Sims: Unleashed is installed, Agnes will usually interact with the non-playable animals, such as iguanas and birds.

As an NPC, she is very glitchy. Contradicting her hatred of romance, she is sometimes a date to other neighborhood Sims and townies. She also washes her hands unusually, due to the fact that she always holds her purse. Like other NPCs from Hot Date, she has a different skin when she is nude. Agnes looks like a fit medium-skinned male when she is nude.

She wears a long, straight dress with a button-up overcoat, along with tight shoes, pearl earrings, a pearl necklace, a pillbox-hat with a small flower-patterned pin, a tight bun, and her large, dark purse. Her dress is gray (unlike Mrs. CrumpleBottom's dress, which is tan/cream). Her hair is gray and is always tied in a very tight bun.

The Official Prima Strategy Guide states that Miss Crumplebottom was the widow of famed philanthropist and puppeteer Robert Crumplebottom:

"Old Mrs. Crumplebottom is the widow of famed philanthropist and puppeteer Robert Crumplebottom. She spends her twilight years roaming the streets and shops of downtown, complaining about newfangled ways and loudly protesting the conduct of the latest generation of Sims. Nothing gets her goat faster than a public display of affection, her radar spots a kiss a mile away. If your Sims are getting fresh anywhere near the Old Prude, expect a thrashing from her purse in short order!"

It appears Robert was indeed Agnes' next husband, even though Erik's ghost was scaring away her potential new partners in The Sims 3, but the new relationship also ended in an unfortunate accident when the chandelier dropped and landed on Robert, according to the description for the "Crumplebottom Chandelier" from The Sims: Vacation. Due to this, the death of not only one, but two husbands could lead to the transformation of Agnes into Miss Crumplebottom. Contrary to how she planned to take Erik's surname after marrying him, it was Robert who took her surname as it was revealed in later games she's a descendant from the Crumplebottom family.

Agnes is deceased in The Sims 2 and buried in the Goth graveyard. At the time of her death, she dressed in a more relaxed manner, coincidentally wearing the same dress her sister Cornelia did. Although it would appear that the old prude's reign of terror finally ended when she was laid to rest, the position was picked up by Mrs. CrumpleBottom, a distant relative,[2] who dresses and carries herself near identically to how Agnes did as "Miss Crumplebottom".

She bears a small resemblance to Veronaville's Julia Pantalone, as she has the same unused hairstyle and the same black widow dress as her. According to SimPE her hair was black before it turned gray, meaning that she may have dyed her hair blonde in The Sims 3. According to her age data, Agnes had 14 days left in the elder life stage when she died.

Strangely, if Agnes is extracted with SimPE to Body Shop and the player switches her gender to male using Body Shop or Create a Sim, she will have a moustache, implying that she was created in Create a Sim, and that her gender was switched to male at some point before her creation was confirmed. This is also the case of Gretle Goth.

Agnes returns in The Sims 4: Cottage Living expansion pack. She resides in the world of Henford-on-Bagley, where she and her cousin Agatha Crumplebottom own a small garden produce stall in the village. At the start of a new save, Sara and Simon Scott, two Henford-on-Bagley residents, have sentiments about her.[3]

Agnes' default emotion is angry instead of fine. She has a hidden moodlet "I'm Always Angry" with a +2 angry buff and with a description of "That's my secret." She loses this moodlet and her NPC behaviour if she's added to the family but inserting the cheat code "traits.equip_trait trait_Hidden_CottageWorld_NPC_AgnesCrumplebottom" will make her temporarily act like her old self. Like in The Sims: Hot Date, whenever Sims act romantically near her or towards her, she beats them with her purse. She can often be seen cross-stitching when she's not running the garden shop. This is part of an idle animation and she does create any pieces of cross-stitch in her inventory.

If the player's Sim has a good relationship with Agnes and they do a "Henford Heart to Heart" with her, she might reveal that she's related to the Goth family, as well as talk about her past relationships with Robert Crumplebottom and Erik Darling.

Miss Crumplebottom examining a table's cleanliness in a bar.

Miss Crumplebottom and an iguana on her arm.

Miss Crumplebottom in a posing program.

Screenshot of possible dialogue Miss Crumplebottom can give to Sims.

Agnes with her sister Cornelia.

A resurrected Agnes in The Sims 2.

A picture of the Crumplebottom ladies (Cornelia Goth, Agnes, Prudence and Mrs. Crumplebottom) with the purse.

Agnes and Erik as a pre-made family.

Agnes and the deceased Erik are kissing. 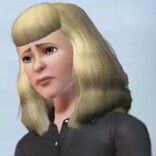 Agnes Crumplebottom sitting in a chair.

Agnes reunited with her husband, due to Ambrosia.

Agnes reading in her home.

Agnes crying by her husband's grave.

Agnes in the trailer.

Agnes and her cousin Agatha in the background.

A flirty sim next to Agnes.

An angry Agnes preparing to smack the Sim with her handbag.

Agnes whacking the Sim with her infamous handbag

Agnes mentioning her past romantic relationships.

Agnes explaining her relation to the Goth family.