The Sims Wiki
Register
Don't have an account?
Sign In
Advertisement
in: Sims, Female Sims, Elders,
and 15 more
English

Agatha Crumplebottom is a pre-created Sim. She currently resides in the the world of Henford-on-Bagley that shipped with the expansion pack The Sims 4: Cottage Living.

She is the cousin of Agnes Crumplebottom and they both live in the countryside world of Henford-on-Bagley. It is known that Agnes and Agatha own a garden business in town, and you can see them frequent the village in their garden produce stall. She and Agnes are polar opposites. Agatha is known for being sweet and bubbly, while Agnes is known for being mean and crude (occasionally hitting unsuspecting Sims with her infamous handbag).

Agatha is an expert gardener, and has many skills shared by her cousin. She also has a tendency to be flirty with other Sims, much to the dismay of her very conservative cousin, Agnes. 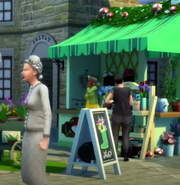 Agatha Crumplebottom attends her food stall that she owns with her cousin Agnes.
Polski
Community content is available under CC-BY-SA unless otherwise noted.
Advertisement