Adult
A life stage · Featured in: 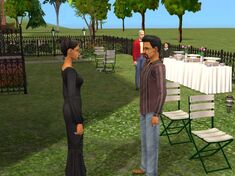 Two adults in The Sims 2.

In this stage, Sims can take up full-time careers, get married, give birth and adopt children. In The Sims, they are the only Sims who can prepare food. Consequently, it is fairly difficult for a household to function without adults.

Adult Sims can use most of the objects in the game and perform the most interactions with other Sims.

In The Sims, being an adult is permanent and children do not become adults without spells, mods, or third-party tools. While adult Sims can die if something kills them, they never age, so they have indefinite lifespans. It is the main lifespan of the Sims in this game.

In The Sims 2, the adult stage is the longest and most important life stage. It is preceded by the teen life stage, or the optional young adult stage if The Sims 2: University is installed. It is the only life stage in which a Sim can get pregnant and get a full-time job. Adult Sims that are 5 days or less away from becoming elders cannot get pregnant.

In The Sims 2 for console, adult is the only life stage in the game; much like The Sims, Sims do not age.

In The Sims 3, the adult stage is no longer the default age when entering Create a Sim, having been replaced in this role by a new version of the young adult stage. Adults in The Sims 3 instead represent middle-aged Sims, and are approximately between 40 years old and retirement age. They will gain a few wrinkles upon aging up from young adults, but not to the same extent as Sims in the elder stage. They also can have age details, visible in CAS.

Gameplay-wise, there are few noticeable differences between an adult and a young adult; they can still get married, join careers and have children, and will not gain any further traits. However, the likelihood of a female adult Sim successfully becoming pregnant when attempting the Try for Baby interaction is somewhat lower than it is for a young adult Sim.

If The Sims 3: Generations is installed, adults are slightly more distinct from young adults. Depending on their actions and achievements (or lack thereof) as a young adult, a Sim may experience a midlife crisis at the beginning of the adult stage. This causes the Sim to gain a special moodlet for a number of days equal to 25% of the lifespan (if this results in a decimal value, it is rounded up), which will cause them to roll midlife crisis-related wishes distinguished by a red background. If the player promises and fulfills the Sim's crisis wishes, the moodlet will become a positive one, but if no wishes are fulfilled the moodlet will become negative. Any crisis wishes promised by the player cannot be canceled until the moodlet expires, though a midlife crisis can be ended early by going to the hospital and selecting the new "Get Therapy" option.

In The Sims 4, the adult stage follows the young adult stage and is before the elder stage. Adults are slightly fatter and saggier than young adults and gain several wrinkles and lines, but not to the same extent as elders. Adults will no longer gain new traits and take 24 days in the normal lifespan to age up.

In gameplay, adults are largely the same as young adults. They can still go to work, get married and have children, though female adults are less likely to become pregnant after attempting the "Try for Baby" interaction. Unlike in The Sims 3, adults can be a parent of a young adult when connecting relationships in CAS.

An example of an adult in The Sims, Michael Bachelor

An example of an adult in The Sims 2, Brandi Broke of Pleasantview

An example of an adult in The Sims 3, Gunther Goth of Sunset Valley