Not to be confused with Adrien Rhome (hidden).

Adrien Rhome is a pre-made adult Sim from Four Corners, one of the neighborhoods shipped with The Sims Life Stories. He and his wife Sara are among the residents that are new to the neighborhood. It is said that Adrien and his wife both hide a dark past. He works as a Resident in the Medicine career. He and Sara can be found in the family bin at the end of Riley's story as well as in the Free Play version of the neighborhood.

When the family is first played, Adrien will have 26 days left before he becomes an elder. He has the Family aspiration and the Pisces zodiac sign. His interests in the Free Play version are different from the Story Mode version. Even though Adrien has reached level 4 of the Medicine career, he doesn't have the corresponding career reward available for him to purchase. 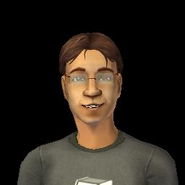 Adrien's head-shot in the Free Play version of the neighborhood.
Add an image to this gallery
Retrieved from "https://sims.fandom.com/wiki/Adrien_Rhome?oldid=912622"
Community content is available under CC-BY-SA unless otherwise noted.