The Sims Wiki
Register
Don't have an account?
Sign In
Advertisement
in: Sims who have mastered a skill, Sims with mismatched sign, Sims,
and 18 more
English

Adrian Young is one of the pre-made NPC maids who resides in Desiderata Valley, the neighborhood shipped with The Sims 2: FreeTime. The other two maids are Joy Tan and Ashlee Couderc. He can be made playable by befriending and asking him to move in, or by marrying him. Adrian has the same facial structure as Berjes Smith. He is one of a few maids to have hidden pictures of Brigit the Maid deeply saved in his character file.

Adrian is dressed in a 70's male maid style which consists of a white half unbuttoned shirt, black pants and gloves. He has a black Mohawk, green eyes, and dark skin. Adrian's Aspiration is Romance, and his zodiac sign is Libra. As far as personality, he is somewhat outgoing and active, and a little bit neat and nice. But Adrian is quite serious.

When it comes to his skill points, he has maximized the cleaning skill, and is on his way towards maximizing the cooking skill. Adrian is mostly interested in Food and Culture. Despite being a maid, his head-shot reveals that he doesn't wear the stereotypical maid outfit before he is first spawned in-game. There are several other NPCs from Desiderata Valley who also have this quirk. Adrian's pre-destined hobby is Cuisine. Despite his lifetime want, Adrian isn't interested in sports. 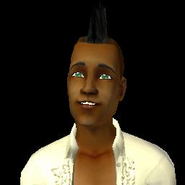