Adrian Hourvitz is one of the pre-made teenage townies who resides in Four Corners, one of the neighborhoods shipped with The Sims Life Stories. He can be made playable by aging him up with another teenage Sim, and then befriending and asking him to move in, or by marrying him.

Adrian is a C student enrolled in Public School at the start of the game, and is employed in the Medicine career as a Nursing Home Attendant. As far as personality, he is very outgoing, somewhat active, and a little bit neat. But he is quite serious and grouchy. When it comes to Adrian's skills, he is halfway towards maximizing the creativity skill, but he doesn't have a particularly high level in any of the other skills.

He is mostly interested in Money, Politics, Sports, and Entertainment. Adrian has the same facial structure as Randy London. His lifetime want is randomized at the start of the game. It is only referenced in the game files that he has no lifetime want. Despite Adrian's career, he isn't interested in Health. 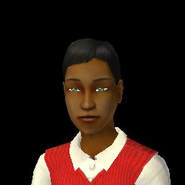 Adrian's head-shot in the Free Play version of the neighborhood.
Add an image to this gallery
Retrieved from "https://sims.fandom.com/wiki/Adrian_Hourvitz?oldid=769289"
Community content is available under CC-BY-SA unless otherwise noted.