The academy is a new lot assignment that was introduced in the The Sims 3: World Adventures. Academies attract Sims with and improve the building of the martial arts skill. They also attract athletic Sims.

The only premade academy in the game is located in Shang Simla, although players can change the lot assignment of any lot to an academy. However, the martial arts equipment is not available without the use of the buydebug cheat. 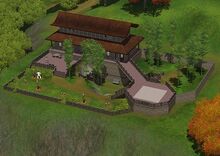 Located in Shang Simla, the Phoenix Martial Arts Academy is where Sims seeking Martial Arts training can go. Inside you can find athletic equipment as well as training dummies, board breaker objects, and other martial artists to spar. This lot attracts explorers.

Retrieved from "https://sims.fandom.com/wiki/Academy?oldid=922066"
Community content is available under CC-BY-SA unless otherwise noted.