The Sims Wiki
Register
Don't have an account?
Sign In
Advertisement
in: Sims, Male Sims, Young adults,
and 21 more
English

Abraham Finkel is a pre-made townie that is living in Sunset Valley who can be seen wandering around the town. He can be made playable by marrying him or asking him to move in.

He can be recognized by his very athletic looks despite his grandiose body and his long blond hair with red streaks. The red streaks in his hair often go unnoticed. He doesn't have any skills and relationships at the start of the game.

If he moves into the neighborhood, he will always live with Sunny Bakshi and Ian Bowler.

If Seasons is installed, Abraham normally runs the kissing booth for boys during the Spring festival. 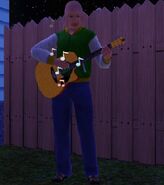