The "Millions in Singles"-ton household, also known as Singleton family, is a pre-made household residing in Appaloosa Plains, the world introduced in The Sims 3: Pets. It consists of two brothers, intellectual Rodney Singleton, and party animal Booker Singleton, and their horse Glint 3.0. Glint 3.0's predecessor, Glint 2.0 Singleton and possibly Glint 1.0 are already deceased when the game begins. They live at 301 Sweetapple Ridge Way in The Render Farm lot and start off with 50,000 Simoleons.

According to the family biography, the brothers got rich through investing in the tech sector just before the dot com bubble burst. Both later moved to the midwest, but they didn't have much success at horse breeding as proven with Glint 1.0 and 2.0, Glint 3.0's predecessors.

It's also revealed shortly after playing with the brothers that Booker's ex-girlfriend, Imogen Pelly, is pregnant with their first child together.

As noted, the Singleton family is wealthy, owning a large mansion and having §50,000 in family funds. It also hinted that they have plans for the town, which may involve luring more tourists or permanent residents. These plans have upset some long-time locals like Tate Curley who would rather live in peace without any city-folk altering the scenery to their liking and possibly luring more careless people like the Bedlingtons to live in the township. 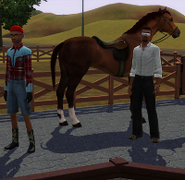 The Render Farm - back, day.
Add an image to this gallery
Retrieved from "https://sims.fandom.com/wiki/%22Millions_in_Singles%22-ton_household?oldid=869743"
Community content is available under CC-BY-SA unless otherwise noted.